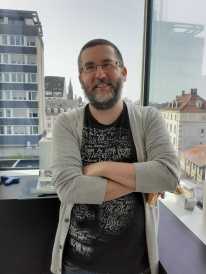 After graduating from ESPCI with an engineering degree, David pursued his Ph.D. with Pr. Max Malacria at the Université Pierre et Marie Curie until December 2009, where he explored new cobalt-, rhodium-, and gold-catalyzed cyclizations. After two and half years of postdoctoral research at the University of Rochester with Pr. Alison Frontier studying Nazarov electrocyclizations and one year at the Institute of Chemical Research of Catalonia (ICIQ) with Pr. Antonio Echavarren developing new gold-catalysts, he was appointed by the CNRS as Chargé de Recherche (Assistant Professor) in 2013 at the Université Paris-Sud. In 2017, he became Associate Professor and joined our lab in November 2019 to further his burgeoning work on the use of hexafluoroisopropanol in synthesis. He was awarded the habilitation to direct research (HDR) in November 2020. Outside work, he is a huge fan of PSG and enjoys reading, travelling and a nice glass of gin. Click here for his personal homepage.

Kamila was born and raised in Gdansk, Poland and obtained her MSc Eng degree in Chemical Technology from Gdansk University of Technology in 2011. Shortly thereafter, she moved to Edinburgh, Scotland to pursue a PhD in physical organic chemistry with Dr Scott Cockroft and defended in September 2015. Kamila joined the Moran group as a postdoc in January 2016 to develop metabolism-like reactions potentially related to the origin of life. In October 2019, she joined the CNRS (French National Center for Scientific Research)  as an independent research scientist (chargé de recherche) associated with our lab and launched a project using her engineering background to create out-of-equilibrium prebiotic environments in flow. Outside work, she enjoys everything science-y, a good workout, training martial arts, listening to opera and experimenting with food, not necessarily at the same time. Click here for her personal homepage.

Nicolas was born in Toronto, Canada and raised in the suburbs thereof. He obtained his PhD in July 2020 in the group of Mark Lautens at the University of Toronto studying palladium-catalyzed heterocycle synthesis and functionalization by aromatization and dearomatization. Nicolas joined the Moran group as a Marie Curie postdoc fellow in September 2020 to pursue the origin of life research program. Outside work, Nicolas likes video games (fall back career) and going to the gym.

Marie was born in Angers (France) in 1993. After obtaining her MSc degree and magistère in 2015, she received an MRT fellowship to pursue a PhD in the group of Vincent Gandon and Christophe Bour at Université Paris-Saclay, working on the activation of C-C bonds with Lewis acids to access complex polycyclic structures and on the synthesis of tertiary ethylated amines. After obtaining her PhD in November 2018, she moved to Vienna as a postdoctoral associate in the group of Nuno Maulide to work on a collaborative project with Boehringer Ingelheim and to develop new methodologies using electrochemistry.  She joined our group in November 2020 to work on new synthetic methodologies. Outside work, she likes to travel, watch sports and enjoy a good meal. 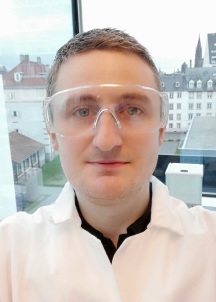 Quentin received his PhD in 2017 in the group of Prof. Françoise Colobert, working alongside Dr. Joanna Wencel-Delord (CNRS, Strasbourg, France). His doctoral studies focused on the control of axial chirality by sulfoxide‐directed C−H activation. He joined the Procter Group (University of Manchester, UK) as a PDRA in 2018, focusing on borylative copper‐catalyzed asymmetric multicomponent reactions. He then joined our group in December 2020, where he is working with Dr. Kamila Muchowska on the prebiotic origins and functions of biological cofactors. Outside of work, he enjoys music and concerts, cinema, sports as well as hanging out with friends. 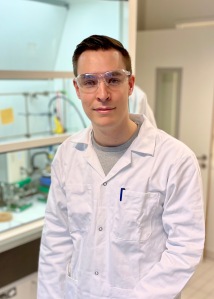 Robert was born and raised in Kempten, Germany. He studied chemistry at the University of Munich, where he joined the laboratory of Herbert Mayr and Armin Ofial in November 2017 to pursue a Ph.D. in Physical-Organic Chemistry funded by a Kekulè fellowship of the Fonds der Chemischen Industrie. During his Ph.D., Robert performed kinetic, mechanistic, and computational studies to elucidate fundamental reactivity trends of different classes of electrophiles and nucleophiles. Additionally, he developed new methods that help to get a quantitative understanding of Lewis acid catalysis. In February 2021, Robert joined the Moran lab as a postdoctoral fellow to work on mechanistic challenges in prebiotic chemistry and was awarded a DFG Fellowship shortly thereafter. Outside of the lab, Robert can be found cooking, in nature, pursuing photography, or the opera houses of Europe. 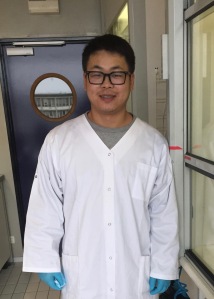 Shaofei comes from Shaanxi, China and studied chemistry at the Northwesten University, China. He joined Prof. Yu Fang’s group at Shaanxi Normal University in 2013, where he obtained his MSc in 2016. Afterwards, he worked at SRED as a chemical engineer. He won a CSC fellowship and joined our team in November 2017 to work on mechanistic studies of boronic acid catalysis and new applications of HFIP in catalysis. Outside the lab, he enjoys photography, badminton, table tennis and basketball.

Jing was born in Hunan and raised in Canton, south of China. She obtained her IUT in Chemistry from Le Mans, then Master’s degrees in Chemistry-Biology and Supramolecular Chemistry at the University of Strasbourg. In October 2018, Jing joined our team with a CSC fellowship to work on the prebiotic polymerization of amino acids. Jing speaks Cantonese, Mandarin, English, French and is learning German. She’s a world traveler, photographer, animal rights activist and a true ecologist.

Harpreet was born and raised in India (Punjab) before moving to Italy with her family in 2007, where she completed her secondary education. She obtained a Masters in Chemical and Pharmaceutical Technologies in October 2018 from the University of Siena. In September 2019, she joined the group to explore the world of prebiotic chemistry. She enjoys traveling and learning about different cultures and traditions,  having lived in three different countries. She also enjoys trying new recipes, painting, badminton, trekking, and music.

Sophia was born in Würzburg and raised in Gemünden am Main, Germany. After completing the French-German bachelor’s programme Regio Chimica, she obtained her Master’s degree in Chemistry from the University of Freiburg in 2019. She joined our group in September 2019 to work on reactions associated with prebiotic metabolism. Outside work, she enjoys hiking, yoga and cooking.

Cyprien was born in 1997 in Metz (France). In 2018, he obtained his BSc degree in physical chemistry in Strasbourg, and then enrolled in the Graduate School for Complex Systems Chemistry of Strasbourg, from which he graduated in 2020. He joined the team as a PhD student in August 2020 (funded by Total) to work on Vibrational Strong Coupling and supramolecular catalysis. In his free time, he likes cooking, playing and watching sports, and is a big Racing club of Strasbourg fan. He also enjoys video games and used to be a content producer on YouTube.

Emilie was born and raised in Strasbourg, France. In 2016, she left her hometown to pursue higher education at the Ecole Normale Supérieure (ENS) in Paris. In 2020, she obtained her ENS Diploma as well as her MSc in chemistry and life sciences from the Paris Sciences et Lettres University. In October 2020, Emilie joined our team as a PhD student to work on prebiotic chemistry. Her PhD is financed by the Ecole Normale Supérieure. In her free time, she enjoys travelling, baking and cooking but also a good pint on a sunny terrace.

Joris was born in Mulhouse and spent his childhood in the surrounding region. He came to Strasbourg for high school and completed his MSc in Chemistry and Biology in 2020. He joined the group in September 2020 with an MRT fellowship to work on understanding the origin of life. Outside work, he enjoys working out, playing sports (badminton, volley-ball, football) as well as playing video games, cooking, reading and cinema.